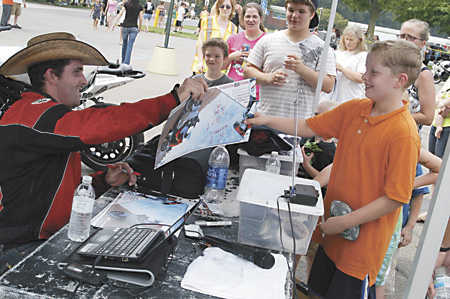 “Josh “The Cowboy” Borne, No. 9 professional street bike freestyler in the world, signs autographs Saturday at the Ride for the Homeless at Southwestern Michigan College.” 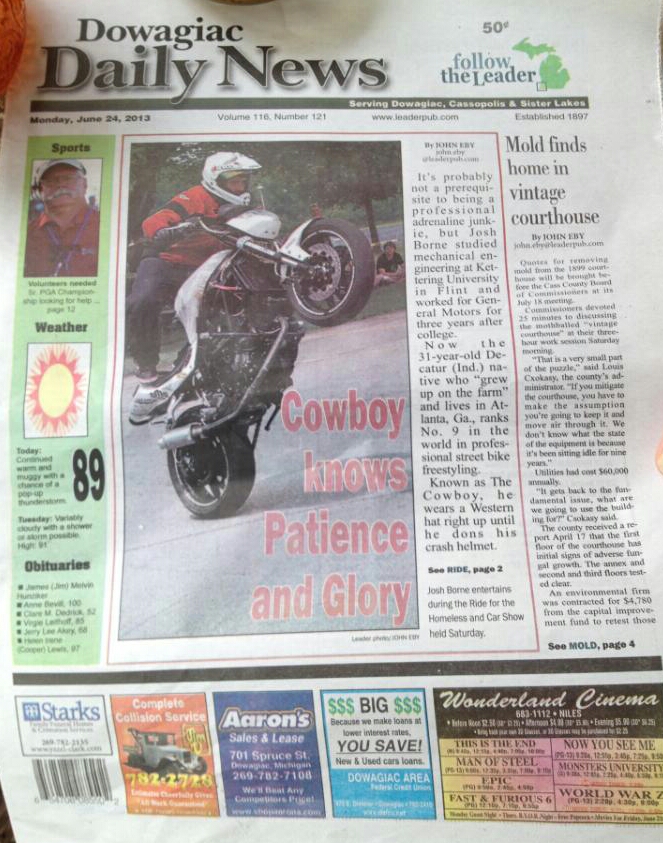 It’s probably not a prerequisite to being a professional adrenaline junkie, but Josh Borne studied mechanical engineering at Kettering University in Flint and worked for General Motors for three years after college.

Now the 31-year-old Decatur (Ind.) native who “grew up on the farm” and lives in Atlanta, Ga., ranks No. 9 in the world in professional street bike freestyling.

Known as “The Cowboy,” he wears a Western hat right up until he dons his crash helmet.

Borne entertained Saturday afternoon at the third annual Ride for the Homeless and Car Show attended by 250 to 300 people.

With his 500-pound companion “Patience,” and another Hyosung motorcycle with police insignia he calls “Glory,” Borne had rubber to burn as he rocketed around Southwestern Michigan College’s parking lot, performing wheelies (back wheel), stoppies (front wheel), handstands (the crowd favorite), acrobatics (both wheels on the ground, rider moving around like an astronaut making a moon walk) and admonishing the audience not to try burnouts, drifting and variations at home.

Not that civilians have access to specially-made Shinko tires which emit red and blue smoke.

“I have to name my girls,” he said. “Each bike has its own individual personality. Patience has been sassy, to say the least.”

“It takes a lot of practice,” the southpaw said after patiently signing autographs for anyone who wanted one — from posters he provided and caps to T-shirts and a toddler’s wheelie bike.

“In 2005, I was blessed to connect up with guys who were doing it on the professional level. They taught me the ropes and trained me in the fundamentals of gliding and doing freestyle riding. After I learned the fundamentals, your imagination takes over for whatever you can do on a motorcycle.”

In his world, there’s lots of qualifying and a NASCAR-style point system.

“They flew riders into the United States from all over the world — Germany, Poland, Japan, China. In 2014, we’re going to expand worldwide with a traveling competition series. FIM (International Motorcycling Federation) sanctions 90 associations in Europe, North America, Latin America, Africa, Asia and Oceania. NBC Universal is going to start picking it up.”

Borne tried to juggle being an automotive engineer during the week and competing on the weekend, but that proved too grueling.

Atlanta seemed to be the “hub” of his travels, so he settled there when he went fulltime in 2008.

Borne said a German, Christian Pfeiffer, is considered the No. 1 rider in the world. “He’s 43 and has been riding motorcycles since he was 3. He’s phenomenal. What you see out here is maybe 40 percent of what we do for competitions,” which factor in audience reaction.

“Competition riding comes down to small things,” he said. “If somebody slips on a patch of gravel. A certain amount of points are decided by interacting with the crowd and how entertaining your run is. You’re also judged on execution and variation and different types of tricks. I didn’t get my first motorcycle until I was 22.”

Now he has nine. He considered playing college football on a scholarship, but he calls himself “the worst skateboarder you will ever meet.”

Borne said, “My parents and family are super supportive. They’ve never rode and don’t even understand what motorcycles are. They were like, ‘What are you doing?’ As I got into freestyle, they love it. They fly out to Vegas to competitions.”

“We were on the East Coast this spring,” he said. “Then we were in Ohio, Indiana and Novi, at Daytona Bike Week and Myrtle Beach Bike Week. One of my good friends, Randy Smith, is friends with Jeremy (Weinrick, shelter coordinator in Decatur for Southwest Michigan Community Action Agency). I think this is a fantastic cause and I’d love to help them grow this event.”

For the full story link, please visit Follow The Leader.

Unable to fetch the feed
Error :

Great times in Michigan this weekend. Thanks Virginia Collett for catching the action. fb.me/4Wc8XQ5ci

Still on of my favorite shots. FLY Street Gear keeping me protected and looking good. fb.me/9a8x7RD6J

Thanks Daniel Farris for the reminder; Can't belive my first trip to Switzerland was 10 years ago. Crazy how time flies!

Only two and a half weeks away! fb.me/1nwpxHavU